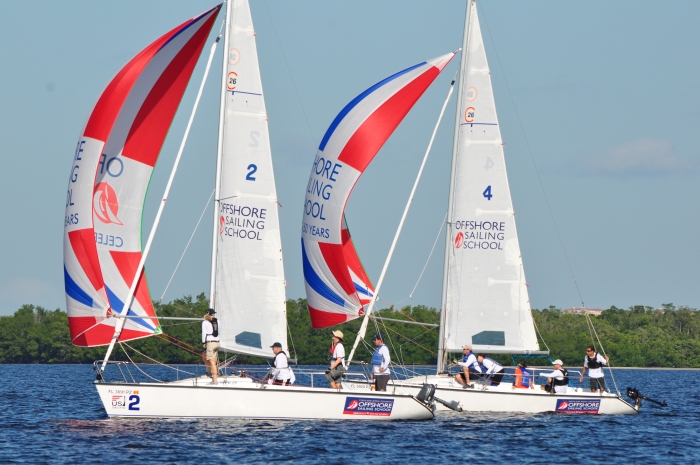 In this comprehensive and fun Florida sailboat racing school, you experience non-stop racing instruction aboard high performance Colgate 26 keelboats, mornings and afternoons, with shore seminars, recaps, parties, and a full-day regatta at the last day. Congratulations to the “Go for the Gold” Regatta winners, our newest racers: Mike Mahan, Kelly Wright and Scott Pittman!

Morgan Reeser – from Ft. Lauderdale, FL – is your Go-For-The-Gold Guest Expert and lead coach. He will conduct all morning and lunch seminars during the program, facilitate recaps at the end of each day, and participate in on-board coaching mornings and afternoons throughout the Race Clinic. 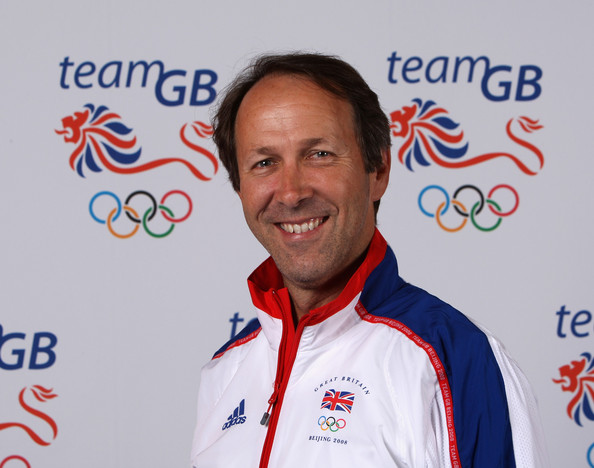 In 2014 Reeser was named US Sailing National Coach of the Year by the United States Olympic Committee (USOC). The USOC’s Coach Recognition Program highlights the accomplishments and contributions of U.S. coaches who train athletes at all levels of Olympic and Paralympic sports. After retiring from Olympic competition following the Sydney 2000 Olympic Trials, Reeser became a full-time coach for Olympic competitors. In January 2018 he coached the 470 Men’s British Olympic Team at the World Sailing’s World Cup Series in Miami.

Some of Morgan Reeser’s Other Racing and Coaching Accomplishments

This rewarding four-day sailboat racing course for sailors who want to win is hosted by America’s Cup and Olympic racer, Steve Colgate – who was inducted into the National Sailing Hall of Fame in October 2015. Steve is with you throughout the four-day sailboat racing course, assisting the coaching team and running the race committee boat. Doris Colgate is by his side, taking photographs of your race-training and sailboat races.

FOUR EXPERT COACHES SAIL WITH YOU EACH DAY

MORGAN REESER – is the lead instructor who will conduct all the seminars and recaps (see photo and bio above). Morgan will also coach on on one of the boats throughout the program. The other three coaches are: 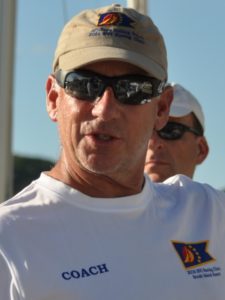 TOM BABEL – who many of you know as one of the Performance Race Week and past Go-For-The-Gold Race Clinic coaches. Tom has over forty years of sailboat racing, sailmaking and coaching experience. He grew up sailing in Traverse City, MI where he still lives, started in the sailmaking business in 1973, and has been racing and teaching ever since. His numerous victories and accomplishments include Chicago-Mackinac races, Port Huron-Mackinac races, M.O.R.C., S2 7.9 North American Champion and 5th in J-24 Worlds. Tom’s expertise covers the spectrum, from big boat racing on down to Lasers. Now the owner of Tom Babel Sailing Services, he serves as tactician, coaches, and consults throughout the United States. 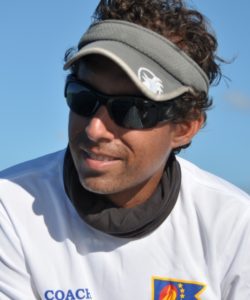 ROD FAVELA – another favorite from past Performance Race Weeks and Go-For-The-Gold Race Clinics, is owner of Vela Sailing Supply and an expert on performance rigging and layout. His racing experience covers the spectrum from Sunfish and dinghies to Vipers, J24s, Melges 32s, and Farr 39s, from small lakes to open oceans, as helmsman, tactician, and trimmer.  A boat speed specialist, Rod has been coaching kids and adults in racing and cruising (as well as marine rescue).  Most recently he won regional championships in Sunfish and the North American Championship in Hobie 33’s. Rod’s latest venture is joining the VX One Design distribution network, racing and promoting this 19’ rocket ship. Rod currently lives in Dallas, TX, where he is active with local dinghy fleets and PHRF. 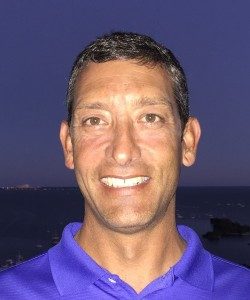 PAUL ABDULLAH –is a long time Thistle and J/24 sailor from the North Florida area and has competed in national competitions for most of his adult life. Paul has won class championships in the J/70, J/24, Thistle, Y Flyer, Highlander and Interlake classes. He is a member of the North Sails One Design team, is one of 10 coaches who have participated in the annual Offshore Sailing School/North U Performance Race Week,  and volunteers his time running the US Sailing Championship of Champions event. 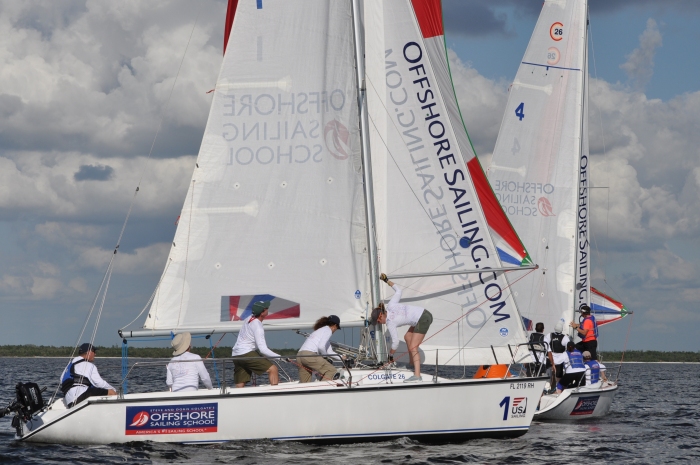 This special Go-For-The-Gold Sailboat Race Clinic is for those who already race sailboats and want to get that winning advantage over the competition back home; and for knowledgeable, experienced sailors who want to get into racing. Crews will be assigned as closely as possible according to individual sailing backgrounds.

Competitive Spirit and Physical Fitness Is a Must

The Colgate 26s are fast, responsive and fun to sail, with lots of adjustments you can transfer to your boats back home. You are on the water morning and afternoon, with non-stop boat and sail handling drills, lots of practice starts and lots of short races. 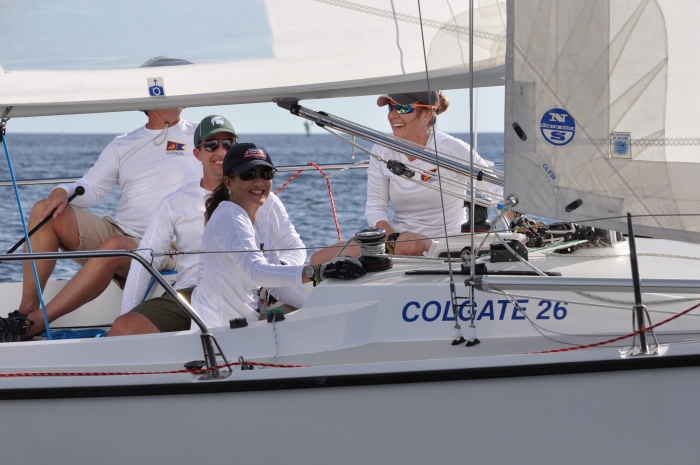 Virtually Everything is Included in Your Four-Day Race Clinic Package

All your meals except two dinners, and your travel, are all you need to add. Here is what is included in the rates listed at the end of this page:

Package Rates for Race Clinic Participants Include Everything Above 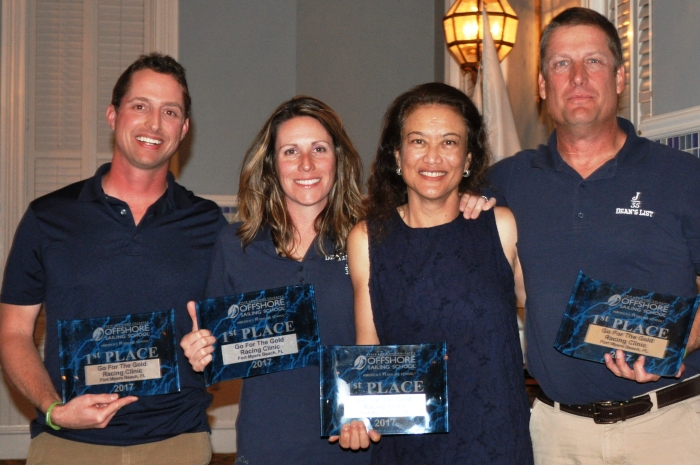 All accommodations are in one bedroom and two bedroom villas in the White Sands building overlooking the resort’s exotic Octopool pool and miles of sandy beaches, in the same building where our seminars and dinner are held. All villas have a fully equipped kitchen, washer/dryer, spacious living and dining area, TV, DVD player, WiFi and screened and furnished private lanai.

Bring a Loved One or Friend to Share the Fun 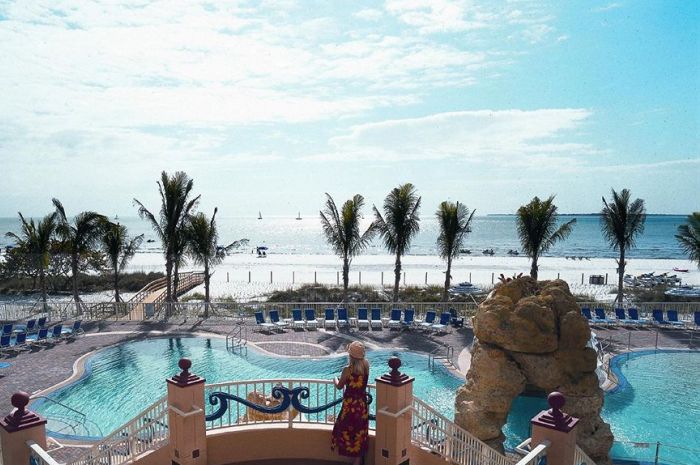 This is a wonderful place to kick back and relax, while enjoying Florida sunshine and warm weather!  Pink Shell Beach Resort & Marina has a full-service spa for ultimate relaxation, and each room comes with coupons for two free buffet breakfasts each day. We encourage you to bring a loved one or friend to share your getaway. If you are bringing someone who is not in the program, please use the single rate below for the one-or two-bedroom villa and add $200 to your total package for the two dinners if they are going to join you at these fun events. If your party includes more than one non-sailor, please call 888-454-7015 for rates. 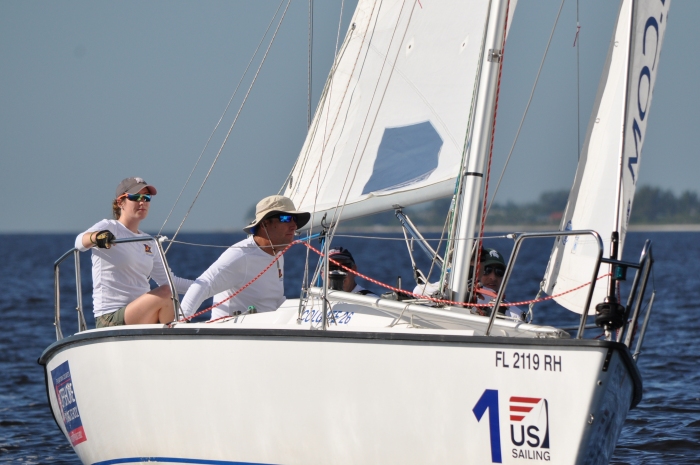 A one bedroom villa accommodates a maximum of four persons, with one king bed in the master bedroom and a double size sleeper sofa in the living area. The package rates below include everything listed above and are for two, three or four sailors sharing a one-bedroom villa, or for a single traveling alone.

If you are an Offshore Sailing School graduate who has participated in a previous Performance Race Week, Racing Clinic or gained US Sailing certifications through Offshore, you are entitled to a 10% Loyalty Discount if you buy the boat and bring a full crew, or Save 5% if you are solo on all the above rates.

Photos on this page were taken during the 2017 Race Clinic. Crews are put together based on resumes. Please be very frank about your experience and goals and be sure to give us your shirt size when you sign up and complete your sailing resume. Come prepared to learn and have a great time!